A lot of great business ideas arise out of personal adversity, and that was certainly the case for  Vanessa Cowan. In 2014 noticed she was losing her hair. It was a traumatic experience that ended with her being completely bald. She looked around for help and was dismayed by what she found. It was then that she decided to turn her condition into a positive.

Glamorous Butterfly is now the nations premium supplier of custom cut and dyed wigs. The range runs from free wigs, for those who can’t afford them, to £10,000  tailor-maid creations. Venessa’s success has been driven by fully understanding the practicalities and emotions of the problem, and being determined to help.

So what’s bothering you and what could you do to solve the problem for other people? The answer could not only help thousands, but also be your passport to prosperity. 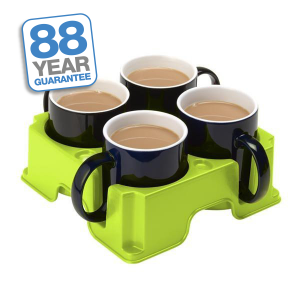 I just read about a stackable drinks tray called Muggi that is guaranteed for 88 years. That got my attention in a way which a 10 year guarantee or even a Lifetime Guarantee,  wouldn’t have. Why? Because I’ve never seen an 88 year guarantee before.  It’s an unusual number and it stopped me in my tracks, as it would most people I think.

This is something worth thinking about when you’re attaching numbers to anything business related – prices, guarantee periods, service periods or whatever.  Use the same numbers as everyone else and they will just wash over your potential customers unnoticed.  But do something a bit different and it will give them pause for thought. And while they’re paused, they just might buy something.

Peer to peer services are big news, as is anything with eco credentials. Here’s an idea that combines the two.

Anyone who is signed up with TiMMi Transport in Leipzig, Germany can offer to transport packages in and around the city. The key to the service is that deliveries must be taken by someone who had already planned on going to the destination. This helps prevent the need to book additional journeys, for both retailers and consumers. All transactions and journeys are logged through the TiMMi website, making tracking and safety easy to manage.

A Peer-to-peer delivery service reduces costs for the consumer and  improves the environmental credentials of various methods of delivery. It seems like there’s an opportunity for an ambitious entrepreneur to do something similar in UK cities.

Here’s an idea from Australia which could definitely work in the UK.

Whilst it’s easy to find  customer reviews for cafes, restaurants and plumbers, it’s not so easy to find reviews of services that help those with disabilities. That’s where Clickability comes in.

Choose a bad restaurant and you get a bad meal, but the implications of choosing bad products or services for the disabled are much more serious. The idea is to give users with disabilities much better access to care and services and a wider, more informed choice based on user reviews. It’s an online directory, like Yelp, but for people who are disabled. Clickability now covers two Australian states – Victoria and New South Wales – but the plan is to go nationwide.

As a cyclist, I can relate to the problem being tackled here, but am somewhat bemused that public money is being spent on it.

There are few things more frustrating for cyclists than red lights, especially when riders have built up a good speed only to have to apply the brakes and lose all that momentum. To make things easier Dutch operation Springlab has designed a new system called “Flo”, which is being tested out in the city of Utrecht and has been set up to work alongside the city’s cycling lanes.

It works by using speed cameras placed 100 metres before each set of traffic lights, and calculates whether or not the cyclist should change speed to hit the green light. It uses animal pictures to inform a cyclist if they should change speed, so a rabbit means speed up, a turtle means slow down, a cow means cyclists are hitting the red light no matter what, and a simple thumbs up indicates the cyclist is doing the right speed.

I can’t see this coming to a UK road anytime soon but it is evidence of the growth in popularity of cycling and how seriously it’s being taken. There’s little doubt that there’s serious money to be made for anyone who can come up with products or services to make cycling more fun, less hassle, or safer.

Cookies are small text files that help us make your experience on streetwisejohn.com better. Although cookies are nothing new, we now need your consent to use cookies. If you don’t want us to use cookies, some parts of the site will not work. By using any part of the site you consent to the use of cookies. On streetwisejohn.com we use cookies to help us make the experience on the site better. Cookies are small files which are sent back and forth with web pages which can be used to identify that you have previously visited a site, or to store small bits of information locally with you. If you want to know more about what cookies are and how to control them, AboutCookies.org is a great resource, or read on to see what we use cookies for. We will use a cookie to remember your preference (so that we don’t bother you with this question next time you visit).