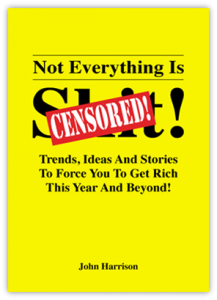 “What Do The Kentucky Taxi Driver, The X Factor Reject And The Kilt Wearing Canadian Have in Common? They’re All Living Proof That Contrary To What You’ve Heard In The Media, Not Everything Has Turned To S##t!”

In the time it will take you to read this information, at least one person in the UK will have done something you could be excused for thinking was impossible. And by the time you turn in for bed tonight, another 121 people will have followed suit…

I t won’t end there though. Tomorrow, another 122 people will achieve the ‘impossible’ and the same thing will happen the day after, and the day after that. In fact by this time next year, around 45,000 people will have done something which, if the mainstream British media is to be believed, is about as likely as seeing flying Pigs over Plymouth.

Despite the media-fuelled doom and gloom, the number of millionaires in the UK is growing at an alarmingly high rate – alarming that is if you’re a tabloid news editor and are desperately scratching around for another misery story for a readership painstakingly nurtured on negativity. Over 90,000 new millionaires were created in the past two years…over 120 a day…but you probably never got to hear about that, or much of the other good stuff that’s happening.

It doesn’t fit the agenda, so it doesn’t get heard.

The truth is that we really have never had it so good! Yes we’re in the midst of an economic downturn but we still have a better standard of living than any civilisation or generation in history. Our health is better, we’re living longer and we’re safer from war, violence and disease. We have more labour saving devices, cars, electronic gizmos, entertainment choices and general ‘stuff’ than at any other time or in any other generation. More opportunities too. Yes there were times when it was simpler, but were there times where we had it better? Only in the realms of nostalgia.

We have more money making tools literally at our fingertips than could have been imagined even 20 years ago. For example as I sit here typing this, it’s easy to take for granted the fact that I have a machine sitting on my desk which affords me immediate access to everything I need to go from zero to a fully functioning cash generating business – in less than 24 hours.  Try telling an entrepreneur from the 1970’s or 1980’s that he had more opportunity than you!

But what are these opportunities, how do you take advantage of them, and what do you need to do to put yourself in poll position to join the 45,000 ordinary people becoming new UK millionaires each year? These are the questions I set out to answer in this  book…

“Not Everything Is S##t!  Trends, Idea And Inspiring
Stories To Force You To Get Rich This Year And Beyond.”

Opportunities are what this book is all about…opportunities to make money now, opportunities to cash in on upcoming trends and opportunities to be inspired by others.  It’s a unique recipe of ideas, trends and stories, written with the aim of helping you get rich NOW!  Contrary to what the newspapers and other media might have you believe, tens of thousands of people will get rich this year.  The same thing will happen next year, and every year thereafter. There’s no reason at all why one of those people won’t be you, and the mental springboard or golden nugget of information you need could be here.

Here are just a few of the things you’ll learn…

And that’s not even half of the ideas you’ll find in the book!

As you can see, these ideas and businesses came from all over the world, but what I know for sure, is that they have never been brought together in one place like this before. What’s more, they have never been subject to my interpretation and analysis before. I’ve looked at the original ideas, and then considered to how they might be copied, developed, adapted or improved upon.

When I was selecting material for the book, I was mindful of the real limitations in both skills and financial resources which most of us have  So for the most part, I’ve tried to stick to ventures which are open to the vast majority of people. That doesn’t mean of course that everything will be right for you, but if you don’t find at least a few ideas that give you an ‘Yes…I could do that!’ moment, I’ll be both surprised and very disappointed.

No need to re-invent the wheel…

There’s no need to beat yourself up trying to come up with something totally unique or original. In reality such things rarely exist anyway. Someone else has already done most of the hard work to test this stuff out. It’s working for other people and it can work for you too. Someone else again… me…has done the last bit of hard work….bringing all this insider ‘next-big-thing’ information into one place, which you can absorb and implement – in your own time and at your own pace.

All you need to do is get hold of a copy of this groundbreaking book. I’ve arranged for you to do that at a price that I know is going to surprise and delight you.

Send for  a pre-publication copy of “Not Everything Is S**t. Trends, Ideas And Stories To Force You To Get Rich This Year And Beyond” on approval. If you’re not happy with it for any reason whatsoever, simply return it within 30 days of receipt for a no-questions-asked refund.

4 thoughts on “Title: Not Everything Is Shit”